Digital fisheries library devices, each containing over 26,000 aquatic and marine science publications, were donated to 14 state colleges and universities from around the Philippines.

The libraries, hosted in a flash drive and Wi-Fi router powered by the Library Box software, are composed of the collection of the International Association of Aquatic and Marine Science Libraries and Information Centres (IAMSLIC) of which SEAFDEC/AQD Library is a contributing member.

Stephen Alayon, acting head of SEAFDEC/AQD’s Library and Databanking Section said the device will give students access to the IAMSLIC collection even in places where there is intermittent or no internet connection.

“The library of fisheries schools will just switch on the gadget and the students can download the materials to their mobile phones as long as it’s a smartphone,” Alayon added.

With only half of its 128-gigabyte storage capacity used, he also said they intend to add more publications in the future as they continue to digitize SEAFDEC publications.

The devices, funded by SEAFDEC/AQD, were turned over to representatives of the colleges and universities during its Book Launching Ceremony on 12 July 2018 in commemoration of its 45th Anniversary.

Alayon further revealed that the Philippines is the first country in Asia to use the device with the first five units distributed in 2016 to libraries devastated by Typhoon Haiyan (Yolanda) including Visayas State University in Tolosa, Leyte; Northern Iloilo Polytechnic State College, (NIPSC) in Estancia and Cebu Technological University in Daanbantayan, Cebu. 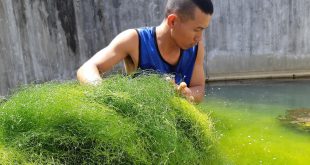 In a bid to produce more of this aquaculture superfood and as efficiently as possible, Mandario recently established the optimal light conditions for the polychaete hatchery where the mudworm eggs are hatched, and larvae are nursed. The finding is important because the 10,000 species of polychaetes have varying responses to light at their different life stages.