We would like to announce that SEAFDEC/AQD’s FISHWORLD museum-aquarium and visitor center is temporarily closed effective immediate, until further notice. This is in light of the growing concerns of COVID-19 in the Philippines. This temporary closure is in accordance with Presidential Decree No. 922 “Declaring a State of Public Health Emergency Throughout the Philippines.” FishWorld is implementing this safety measure to do its share in limiting the spread of the virus by avoiding the conduct of mass gatherings including field trips and tour visits. Thank you for your understanding and please stay safe. For more information, please contact: FISHWORLD through email (fishworld@seafdec.org.ph) and phone (63-33 330 7032).

END_OF_DOCUMENT_TOKEN_TO_BE_REPLACED 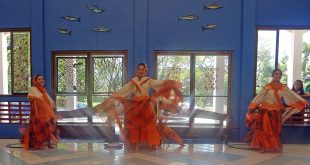 END_OF_DOCUMENT_TOKEN_TO_BE_REPLACED

Calling all students of elementary and high school! Join us for this year's AQUAWEEK 2015. For more information, click here.

END_OF_DOCUMENT_TOKEN_TO_BE_REPLACED

Intro 2014 2015 Intro Since FishWorld opened, the people of Iloilo have reported the capture or stranding of endangered marine animals along the coasts and have brought some of them under the care of FishWorld. Marine turtles are quite often caught by fish corrals in Tigbauan, Iloilo. Captured turtles and dugongs were reported to the Pawikan Conservation Project of the Department of Environment and Natural Resources. All healthy turtles were tagged and released back to sea. However, turtles that were sick, injured, or domesticated and confiscated were held and rehabilitated in the hatchery tanks at SEAFDEC/AQD. 2014 2015