Broad red leaves litter the driveway at the Southeast Asian Fisheries Development Center (SEAFDEC) in Tigbauan, Iloilo during the dry season. Months earlier, the leaves were a brilliant green before turning into shades of yellow, orange and red before falling away from the tall talisay trees lined up along the road.

Groundsmen armed with a leaf blower and broomsticks promptly gather the leaves for disposal early every morning. Their office says the leaves are dumped in one place if not buried. Not too many people know that these dried talisay leaves scattered around the Aquaculture Department of SEAFDEC hold almost magical properties that can solve fundamental problems in the aquaculture industry.

The leaves of the common talisay (Terminalia catappa), also known as the Indian or tropical almond tree, are rich in tannins and a host of organic compounds that condition the water and improve the survival and health of various aquatic species.

The leaves, which were simply added and allowed to decompose in the culture tanks, resulted in a 48% survival of ayungin larvae. Meanwhile, those without the leaf substrate only achieved a 27% survival rate.

Dr. Aya’s study is published in the 66th volume of the journal Ichthyological Research published this 2019. His co-authors are Vicar Stella Nillasca, Mary Jane Sayco and Luis Maria Garcia.

The study supposed that the presence of the leaf litter allowed small organisms, such as zooplankton and insect larvae, to colonize the leaf surfaces. These organisms soon became food for the ayungin larvae. It might have also been possible that the accumulation of leaves at the tank bottom reduced water motion and allowed the larvae to conserve their energy instead of going against the flow of current.

“The darkening of the rearing lake water may also provide a good background or contrast for the larvae to efficiently capture its prey, thus contributing to better feeding success and consequently significantly improved larval survival in the present study,” the paper added, noting the decomposing leaves caused the water to darken.

Indeed, previous studies have shown that the mere presence of leaf litter in culture tanks presents some advantages to improve fish survival. However, other studies using only extracts of the talisay leaf, without the litter, have shown significant improvements in the survival of fish and even tiger shrimp, Penaeus mondon.

“Aqueous extract of tropical almond leaves are known to contain tannins that enhance water quality by reducing pH and TAN levels,” the paper said. Further, other studies have shown that talisay leaf extracts also possess antimicrobial and antifungal properties due to the presence of an array of beneficial organic compounds.

Placing dried talisay leaves in culture tanks appears to provide both the physical benefit of a leaf litter substrate as well as the leaching of desirable organic chemicals to the rearing water. While the method seems simple, more study is still needed, especially on new applications.

Perhaps, soon, the broad red leaves littering the SEAFDEC driveway will be no more. They will all be stashed away in hatcheries and laboratories, no longer neglected, because of their almost magical properties. 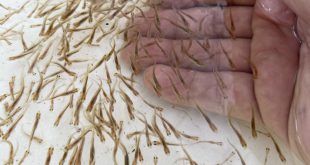