Consul General Jia Li of the Consulate of the People’s Republic of China in Cebu expressed interest to promote cooperation between China and the Philippines with regards to the fisheries sector and hopes to make progress together with SEAFDEC/AQD.

Li toured SEAFDEC/AQD’s Tigbauan Main station on 22 February 2019 at the sidelines of the 108th founding anniversary of the Filipino-Chinese Chamber of Commerce of Iloilo, Inc.

“After this visit, I want to promote several Chinese research centers in fisheries to get in contact with SEAFDEC to see whether we can do more for the cooperation,” he said.

“The Consul General wants to have a collaboration between research institutes in aquaculture, in fisheries, in general, with AQD. I think he was delighted when he knew that there were some MOU between Chinese scientists and AQD, but that MOU will remain an MOU unless there’ll be some proposals that will be submitted,” Dr. de la Peña disclosed.

Dr. de la Peña said there is no problem with receiving funds from China as long as the collaboration is cleared with the SEAFDEC Council, particularly the Philippine government.

Meanwhile, Li invited SEAFDEC/AQD specialists to visit China. “Through these exchanges, I hope we can make progress together,” he said.

“The Philippines has more than seven thousand islands and a lot of sea areas, and also China has quite a large area of sea. I think and I believe that we can do more to promote the cooperation between China and the Philippines in the sea cooperation,” he added 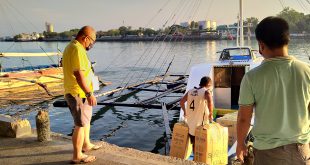 Production and delivery of aquaculture seeds remain uninterrupted at SEAFDEC/AQD based in Tigbauan, Iloilo despite the enhanced community quarantine (ECQ) imposed in Iloilo and surrounding provinces.