Use of recirculation system for tilapia hatchery

Dr. Platon presented his techniques in producing sex-reversed tilapia fingerlings in tanks using a recirculation system. This system operates by pumping water from spawning and rearing modules to dedicated tanks for biofiltration and sedimentation to maintain water quality.

The design used one module of four tanks for spawning and two modules of four tanks each for fry rearing. Each module has two biofilters and two sedimentation tanks. The water movement (see diagram) throughout the whole circulation system is entirely powered by airlift pumps.

The cost and returns analysis of the technique showed a profit margin of 55% at the end of one year production. This figure was attained given an assumption of 70% survival from swim-up to fingerlings (size 22) and selling price of Php 1 per fingerling.

*Dr. Platon joined SEAFDEC/AQD in 1975 as Researcher and eventually became Chief in 1996 until 2006. During his time as Chief, he institutionalized a new thrust through a reorganization of AQD, creating a separate division named Technology Verification and Commercialization Division (TVCD) – now Technology Verification and Demonstration Division (TVDD). 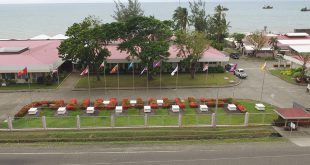