Twelve staff of DOF (Department of Fisheries) and a fishfarmer attended the “On-site training on freshwater fish health management with emphasis on detection of fish-borne zoonotic (a disease communicable from animals to humans) parasites” that was held from 22 until 25 October 2013 at DOF-Yangon, Myanmar.

The course was funded by GOJ-TF (Government of Japan  – Trust Fund) with AQD scientists Dr. Edgar Amar and Dr. Rolando Pakingking, and researcher Ms. Gregoria Pagador serving as resource persons. It is to be noted that AQD conducted a similar course in Myanmar in 2010 and in Cambodia in 2012. 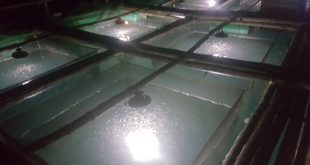 Thousands of collections including fish farmer-friendly materials, journal articles, and books produced by SEAFDEC Aquaculture Department (AQD) and written by its scientists are available online for free through AQD’s very own digital library.